Fingerprints – From Womb to Biometric Scanner

How are fingerprints formed?

Fingerprints are made up of a pattern of tiny ridges and valleys that help us to grip things in the same way tire tread works. But these patterns also provide us with personal identity cards that due to the way they are formed are unique to each one of us, even identical twins. Our fingerprints are formed through a combination of genetic and environmental factors when inside the womb. Although DNA provides a general guide on the way skin should form, the position of the foetus and the composition and density of surrounding amniotic fluid has an effect on how each ridge is formed. These ridges then grow proportionally as the baby grows. The immense possibilities created by these combining factors makes it virtually impossible for two people to have the exact same fingerprints.

Unlike other visible human characteristics fingerprints are relatively persistent with any scarring caused by things such as illness, injury or surgery, never being shown to move about throughout the life of a person. In some cases any scarring may even be a helpful indicator of who the fingerprints belong to.

For biometric devices, the type of fingerprint left behind holds less importance as they are not being collected in the same way as required by a forensic investigation and are not interested in the what and why that may arise from the types of fingerprint briefly described above. Instead it is all about how the fingerprint is read and analysed by technology.

How are fingerprints read

Initially the general patterns type of a fingerprint is used to make initial comparisons and narrow the print down to a group but not an individual. The three general pattern types are loops, whorls and arches which could also be subcategorized as shown in the image. Loops are the most common pattern type appearing in 60 – 65% of fingerprints, consisting of ridges that enter on one side, loop around and exit on the same side. Arches are the least common type of fingerprint pattern, only occurring roughly 5% of the time and is characterised by ridges that enter on one side of the finger and exit on the other with a sight arch somewhere in between.  Finally, whorls are seen around 30 – 35% of the time and represent a circular flow.

After this initial comparison, specific and distinctive points of the fingerprints are compared, known as minutiae. These small irregularities are what make fingerprints unique to each individual and can be defined as the points where the ridge lines end or fork. There are three major types of minutiae features: the ridge ending, the bifurcation, and the dot (also called short ridge). The ridge ending is, as indicated by the name, the spot where a ridge ends. A bifurcation is the spot where a ridge splits into two ridges. Spots are those fingerprint ridges that are significantly shorter than other ridges.

Different types of scanners, work in different ways but all with the same goals in mind. The scanner system does not have to match every minutiae that could be found in both the sample and fingerprint on record, but find enough of a matching sample in order to determine that the prints match. The exact number of matches needed varies according to the scanner but the more minutiae that are matched the higher the probability that the fingerprint is a match. 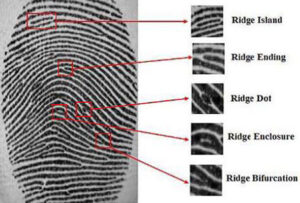 Favourite quote: “Not all storms come to disrupt your life. Some come to clear your path.”